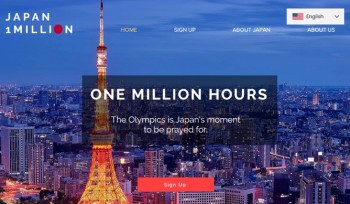 Christians in Japan are asking the world for one million hours of prayer for their nation throughout the Tokyo Olympics and Paralympics.  International Prayer Connect are partnering with them to get this message out and are inviting you to please pray about how you might be able to take part – by pledging at least one hour.

The Japan international Sports Partnership (JiSP) is calling on churches, individuals and families across the world to unite in prayer for Japan as their country takes centre stage from Friday 23rd of July.

Pastor Keishi Ikeda who leads JiSP in this movement is driven by a vision to see the Japanese Church grow to 10 million people by 2024.  “Imagine ten million Christians in Japan...This would change Japan. And not just Japan, we could send teams from Japan into other countries that many can’t get into as our passport is powerful. This is a wave; we need to ride it,” said Ikeda.

The current reality is that the Japanese people are the world’s second largest un-reached people group. Church attendance hovers around 4 in 1000 - with only one being male. Nothing short of a miracle will awaken Japan. We serve the God who has promised miracles. We believe an awakening is coming.

Edwin Orr the great scholar on revivals said, “Whenever there is an awakening there is evidence of three things. People coming together “in one accord,” people hearing the Good News in their own “heart language” and a deep, ongoing passion and commitment to prayer.

As Japan steps into the spotlight these Olympic Games, Christians in Japan are calling on their global brothers and sisters to sign up for at least one hour of prayer.

The Olympics and Paralympics will run for 30 days. If 3,000 Churches globally committed 10 people from their church to pray one hour over these 30 days, we would achieve 900,000 hours – very close to our goal!

Japanese Christians like Pastor Keishi are willing to do anything to see their land coming alive spiritually with 10 million believers by 2024. It is not just about hosting an Olympic Games.

Each of the 30 days of the Games you will receive email prayer points focusing on Japan, the Olympics and Paralympics.